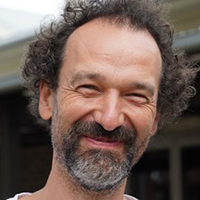 Born to Hungarian and Croatian parents in the former Yugoslavia, Karlo moved to Sydney in the early 1990s to study Natural Therapies at Nature Care College. After graduating, he moved to the Blue Mountains near Sydney. For nine and a half years, Karlo worked with many other complimentary and alternative therapists at Crystal Lodge Health Retreat. In 2007 he set up a private practice as a Naturopath and
Remedial Massage Therapist. Karlo has first-hand experience raising children as he has two daughters, both young adults.

From an early age, Karlo has been interested in the mind-body connection, mindfulness and meditation practices. His search in understanding the mind led him to explore various methods; amongst others he extensively explored Byron Katie’s “The Work” and Dr. John Demartini’s “Demartini Method”. Inspired by these, in 2011 he decided to undertake further tertiary studies, and in 2014 he graduated with honours in Psychology form Charles Sturt University. Since 2015 he has been practicing as a psychologist/psychotherapist in a Katoomba group practice.  As part of his ongoing desire for learning ways to help others, and in order to further his own experience of awakening to ​deeper aspect of himself, Karlo is currently training with the Leela School of Advanced Psychotherapy. Additionally, Karlo has been part of an on-going (5 years) non-facilitated men’s group, and he facilitated and co-facilitated the Blue Mountains Authentic Relating group.