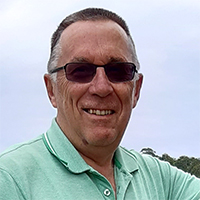 Peter is the current Secretary of The Network. Peter attended his first Network meeting in May 2011. He became the interim Chair in August that year before becoming Chair later that year that continued for the next 2 years. He has served on The Network executive ever since. He has also represented The Network on a number of PHN and LHD Suicide Prevention working groups.

Peter joined the Rotary Club of Kurrajong North Richmond in 1998 becoming President soon after. He has held most board positions within the Rotary Club and is still an active member today. He is also the Vice Chair of Hawkesbury Council’s Human Services Advisory Committee.

In 2006 Peter, after a time of reflection, decided to stop full time employment and now works part time as a business development consultant in the precast concrete industry. This has allowed Peter time to pursue his passion of community volunteering. He values the opportunity he now has to bring balance to his life by enjoying a FULL life instead of a BUSY life. Peter values the extensive knowledge he has of the robust commercial negotiations that he experienced from working in the construction industry. Peter has attended numerous suicide prevention conferences over the last 9 years and has undertaken a number of training courses in this area. He strongly believes in the passion of community volunteers to enhance the mental wellbeing and grassroots resilience of each person living in our local streets and villages.